Divi Children 2.0.5 update to fix conflicts with some other plugins 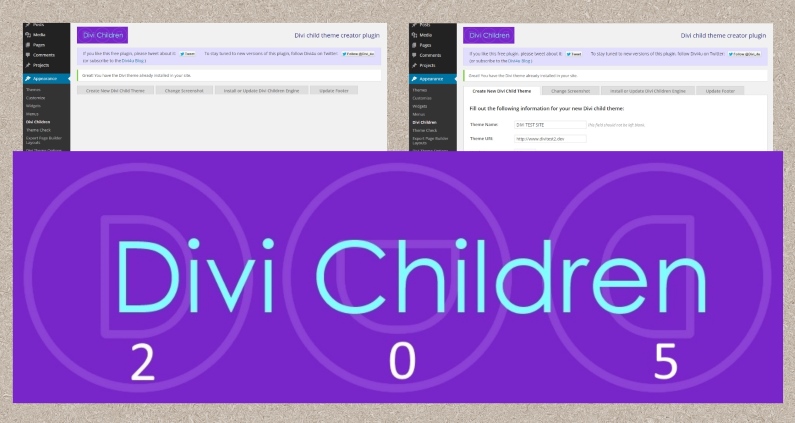 I know many of you are waiting for the release of Divi Children 3.0 which I´ve already announced. I´m still working on some final touches for the 3.0.0 version, and it will be available for download soon.

But I´ve decided to release an intermediate 2.0.5 version of the plugin to fix an issue encountered in some cases when using Divi Children 2.0.0 with some other plugins.

Some Divi Children users have reported an issue that has taken me a long time to reproduce, and therefore to solve. When trying to use the plugin going to Appearance > Divi Children, they got something like this:

The tabs for the different plugin features were shown, but not the panel associated with each tab. So they couldn´t do anything with Divi Children, not even creating their first child theme.

That screen should have looked this way: I couldn´t figure out why this was happening only to some users because, like most of the Divi Children users, I didn´t have any problem at all. So I was not able to reproduce the issue in order to investigate it and find a fix for it.

Until somebody told me that the problem disappeared when deactivating a particular plugin, I didn´t realized that it was caused by a javascript conflict with some other plugin. But then I had a new problem: All the plugins that were reported to be causing this problem when active in the same site as Divi Children were premium plugins I don´t use. So then again I was not able to reproduce the issue.

Finally, a couple of days ago somebody pointed out to me through the comments of this blog that the issue disappeared when the plugin Ultimate Social Media Icons and Share Plugin (Facebook, Twitter, Google Plus, Instagram, Pinterest etc.) was deactivated on his site (thank you, Oriyomi!).

Then I was able to reproduce this problem, and finally came to develop a fix for it.

While this worked, I didn´t feel comfortable with the situation and, in the event that many other plugins could be conflicting with Divi Children, I worked on a fix to prevent the issue from appearing.

I finally changed the js library I was using to manage those tabs and panels and modified some plugin files accordingly, and everything seems to be working alright now.

As I had said on my previous posts, I didn´t have an intermediate release of Divi Children in mind before I had the new 3.0 version ready.

But I believe it is worth to make this fix available to you as soon as possible, for a couple of reasons:

Nothing else changes in this plugin update except for the fix I mentioned, so if you were not experiencing that issue before, you don´t need to update the plugin.

But if you have experienced this issue in any of your sites, I would really appreciate it if you could test the new plugin update, and would love to hear about the results.

And please don´t forget to let me know how it goes through the comments!

Update Feb 2, 2015: Thanks to the feedback I got from some users, an improved new version has been released today. Some more fixes related to this issue have been added to the new version 2.0.5.1, which is the one that is currently available for download.