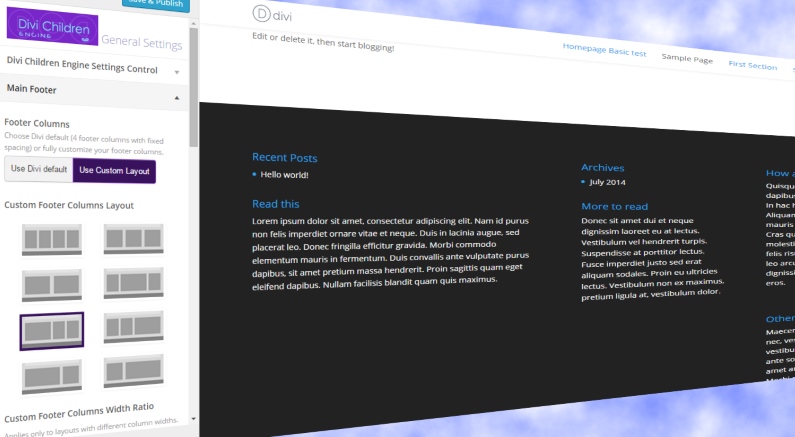 The release of Divi Children 2.0 was a major breakthrough because it introduced the Divi Children Engine and the use of the WordPress Customizer, making Divi customization through child themes a breeze for the site sections that were included in that release (Main Footer, Footer Bottom, Sidebar,…) and also for some custom features like the ones available thanks to the introduction of the Magic Codes.

But as many of you already  know, I´m in my own “crusade” to avoid Divi sites looking all alike. And that implies continuously adding new features to the Divi Children plugin in order to make Divi customization even easier. So, even when you´re not hearing from me, I´m always working on the development of new Divi Children updates on the background.

On this post I´m going to show you a few of the things I´m been working on for the next release, so you´ll get a hint about what to expect from Divi Children 2.1.

With the advent of WordPress 4.0 the Customizer has been further improved with some new features, so I wanted to take advantage of them. One of the new features introduced in the WordPress Customizer is the possibility to organize setting sections into collapsible panels, as you´ve probably seen for widgtes.

That makes the Customizer menu less overcrowded and far clearer, so I thought it would be a good idea to organize all the new sections created by Divi Children into separate panels.

At least two panels will be present in your WordPress Customizer for your child themes created by Divi Children:

Note that from now on the name of your child theme will be displayed on the title of any panel created by Divi Children, as you can see in the image before “General Settings” and “Custom Settings”.

Each of this panels will have its own Divi Children Engine Settings Control section, where for the sake of clarity you can hide any section of the panel, once you´re done with the settings included in that particular section.

But the news about the Customizer do not stop here. I´ve also included a modified version of the great Kirki plugin, which will make some setting controls much easier and way more flexible and intuitive. Although Kirki is available as a WordPress plugin, the new code will be automatically embedded in the Divi Children Engine of the child themes created by Divi Children, so you won´t need to install any plugin in your site to enjoy the new features I´ll present next.

One of the nicest new features available for the Customizer settings is the slider type control. A slider control allows you to choose any value in between a certain value range, which gives a lot of options when compared to other types of setting controls, such as the select type.

For example, you can use a slider control to set a margin to any integer value in pixels within the 0px-100px range, instead of being forced to select a value among just a group of predefined values (or having to deal with an extremely long list of available values otherwise).

This is what a Customizer section with slider controls will look like after the Divi Children 2.1 update: Another nice change you´ll find in Divi Children 2.1 is that some Customizer setting controls are being changed from select boxes to images representing what will be accomplished with each available option, thus providing a more intuitive user interface.

For example, this is the way the control to choose the type of bullets used in the Main Footer will look from now on:

Besides the new Customizer panels and controls (which I think would justify a new plugin update on their own), I´ve being working on some new Divi customization features. Here are the main ones:

The Divi footer became highly customizable after the release of Divi Children 2.0, but there was an important thing still missing to make it completely customizable:

How about being able to customize the Main Footer widget layout itself?

Divi Children 2.1 will allow you to choose your footer widgets layout, giving you the freedom to have a Divi site with 2, 3 or 4 widget columns.

Nice? Wait, there will be some more customization freedom yet: you´ll be able to get an asymmetric layout if you want, with the widget columns having different widths.

Not happy yet? Then I´ll let you set the width of the spaces between widgets columns as well.

And as usual, all that will be on the house, totally free.

When it comes to social icons, Divi includes settings via the epanel just for Facebook, Twitter, Google+ and RSS. But what about the rest of the social media? Divi Children 2.1 will take care of that.

A new Social Icons section has been added to the Customizer, where you can set your social media links and decide which icons will be displayed:

I know, after the recent release of the new Monarch plugin this new feature may not look that appealing, but it was already developed and included in the Divi Children plugin for the 2.1 release weeks before the release of Monarch.

And it is still great for those who just want to have more social media options for the Divi footer or top header and don´t plan to use a social media plugin. The availability of a textarea type control for the WordPress Customizer allows now for a new Divi customization feature that is quite simple and straightforward but nevertheless very useful. I´ve called it Live Custom CSS.

It works just like the Custom CSS box you´re already familiar with in the DiviTheme Options epanel, except for a couple of things:

I truly believe that this new feature will be very welcome, as it is quite useful for testing purposes.

I recommend including your custom CSS in your child theme stylesheet once you are sure about it, but the Live Custom CSS box will serve you as the perfect place where you can play and experiment with your CSS until you´re ready to cut the code from it and paste it on your style.css file.

I´m still working on some other new features which may or may not make it on time for the Divi Children 2.1 update. But anyway, in case they don´t, you can always rely on more Divi customization options being added in the following version.

Since I begun developing the Divi Children Engine, I always have in mind to provide ways to make that any possible new feature created by Divi Children could be available to anybody.

Of course, if you´re a new user and just created a new child theme by means of the last version of Divi Children, you´ll have every single Divi Children feature on your child theme.

But what about users who created their child themes with earlier versions of the plugin? Updating the plugin wouldn´t be of any help (except for new child themes), so they will need to update their existing child themes.

If you would like any other new features to be included in Divi Children, please let me know. Some of you already did and that´s the best way for me to know you´ll find the new features useful when they are released.