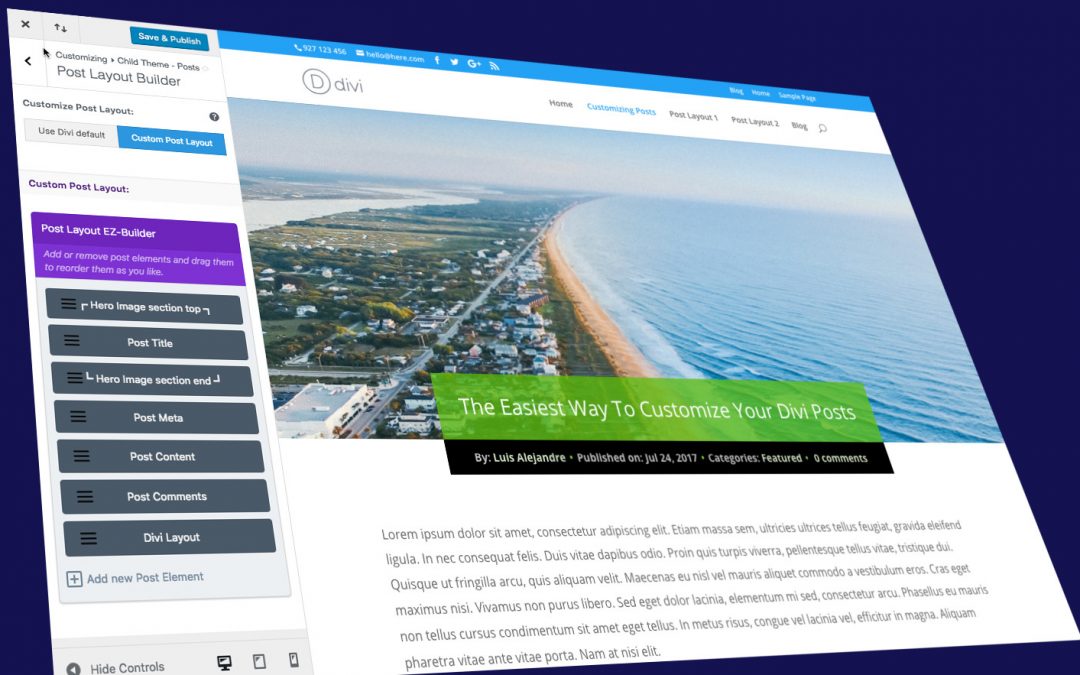 With more than 40,000 downloads already, Divi Children is a very popular Divi plugin. However, it´s been a long time without new features, hasn´t it? Well, let me tell you that I´ve never stopped working behind the scenes. In fact, I even decided to include in Divi Children 3 some nice features I had originally developed for a premium, paid Divi product.

For those of you who still don´t know about Divi Children, it is a free plugin that allows you to easily create highly customizable Divi child themes.

Divi Children 1 was nice because it was the first available way to easily create child themes of Divi at one button click. It also grabbed the information about you and your site automatically, allowed you to change your child theme´s screenshot and even included a function to customize your footer credits.

Afterwards, Divi Children 2 brought very convenient settings to your Customizer for every child theme created by it, even before Divi itself included its first Customizer styling settings, and also before some styling features were added to Divi modules.

But then, after Divi 2.4 and the following versions were released, Divi became a very customizable theme out of the box. Many of the features I had developed for Divi Children (they were released in the Engined child theme first and never made it to Divi Children though) became redundant with the new Divi customizing features.

But there is always room for innovation and improvement, so besides adding whatever features I already had that were not available in Divi yet, I´ve been developing some new things. And, as I implied in the title of this post, I know you´re going to love some of them; like, for example…

Child themes created by Divi Children 3 will make use of a kind of compact, easy to use drag and drop builder that I have named EZ-Builder, directly on the WordPress Customizer. EZ-Builders will be used every time there is a need to add, delete, sort or individually customize elements, for example for layouts. Here you have some good examples:

EZ-Builders for all those four purposes are in fact coming with Divi Children 3, and more EZ-Builders will be developed as needed for future releases.

But what exactly are EZ-Builders and how are they used? The best way for you to figure that out is to see them in action. As an example, here you have the Social Icons EZ-Builder:

In this case, each draggable element represents a social icon and, once you open it, you´ll have three different settings available for it:

In other cases builder elements will represent something else, and will have different settings depending on the context. For instance, in the Post Meta EZ-Builder each one will represent a meta element (like “author”, “date”, etc) and settings will include a text to be displayed before each element (such as “Published by:” or whatever you want to show on your post).

Customizing your Divi posts has never been this easy

A very especial case of these new kind of Customizer builders is the Post Layout EZ-Builder. It will allow you to create your own, personal custom layout for your blog posts in a visual and very easy way.

But that´s not all! The customizing possibilities for your custom post layout will now be endless, because the Post Layout EZ-Builder will also include many added elements and nice features, such as:

And that´s not all either: Once you have created and saved your post layout with the EZ-Builder, you will find a lot of style settings and options waiting for you in the Custom Post Styles section of the Customizer, depending on the elements you have used for your post layout. Combining these custom post styles with other general customizing settings also brought to you by Divi Children 3 ( like h1-h6 headings customization, ordered and unordered lists styles, etc.), you will really be able to easily make your posts stand out.

But don´t take my word for it and see for yourself some of these awesome new Divi Children features in action. Let´s turn the regular, boring default Divi post layout into a much more interesting design, in a matter of just a few minutes:

Every Divi child theme created by Divi Children 3 will come packed with options to make customizing your Divi site much easier.

You may tend to recognize some of the features as not new to Divi Children at first sight, but even in those cases there are a lot of changes. For example, for the time being I´ve only included the Custom Modules that were already available before: Custom Full Width Headers, Custom Sidebars and Custom Call To Actions (Custom Modules in Divi Children meaning Divi modules which can be individually customized using the Customizer, thanks to Divi Children´s Custom Selectors). But Custom Selectors have been refactored and can now be renamed or deleted in this new update. Also, the available settings and options for each Custom Module have changed: I´ve removed all those which are now already available in Divi, while I´ve added new interesting features.

For final, specific touches to your child theme styles, you will find the new Live Custom CSS Customizer section very handy. It applies only to the child theme and it comes with a nice code editor: Speed has also been a concern, and so a new Output Mode section has been added to the Customizer. It will allow you to switch your child theme from Development Mode to Production Mode, once you finish customizing your site. That way, your site will run much faster because your child theme will stop querying the database to retrieve all your settings, and all your customized saved CSS will be sent to output at once instead.

The various Customizer sections available for any Divi child theme created by Divi Children 3 will be organized in several Customizer panels. Here are the panels and sections that will be included for the 3.0 release:

All the news I´ve talked about so far on this post apply to the child themes created by Divi Children. But the plugin itself has also been improved, although most changes won´t be noticed by the user. Many of them are under-the-hood improvements like security enhancements or the use of the WP Filesystem API, for example.

Do you want to be a Divi Children 3 beta tester?

At this stage I will need some Divi users to help me test drive the new Divi Children 3 before its release. If you are interested in testing Divi Children 3 and in providing some feedback, just let me know via the comments.

As Divi Children is a plugin intended to create child themes, we will be testing everything in two phases: in the first place we will test the new child theme features, and once any possible flaws related to the child theme have been fixed, we will then test the plugin functionalities.

If you´re willing to spend some time testing Divi Children 3, I´d really appreciate it and I´ll be looking forward to your feedback. But if you don´t have much time to spend on it and are just curious, please don´t apply to be a beta tester and let other people do it; you´ll have the chance to get the final tested plugin for free very soon anyway.

But wait a moment, is Divi Children 3 still going to be a free plugin?

Absolutely yes. Divi Children is and will always be a free plugin. Those who know me and who know about the history of this site and my Divi products don´t even need to ask.