Don´t try to hide Divi: You don´t need to, it won´t work. 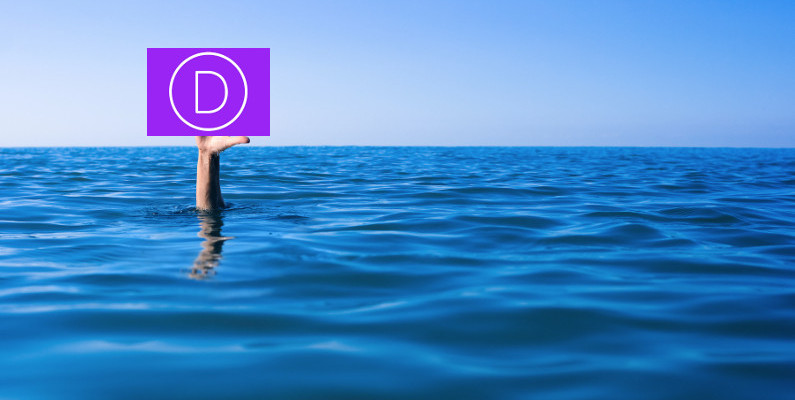 Why all of a sudden some people seem to be so desperately in need of a way to hide the fact they´re using Divi?

Some months ago I learned about the existence of Divi Ghoster, a plugin intended for concealing (white labeling, if we want to use a milder language) Divi. I checked it out and didn´t feel very impressed by it. To tell you the truth I found it a bit lousy, with those admin menu hiding approaches and such. But let me make clear in the first place that I might also be biased by the fact that I don´t quite understand all this fuss about hiding Divi.

Then, yesterday I heard about the new 2.0 version of Divi Ghoster to be released today, some of its exciting new features being its ability to Hide Divi from Theme Detectors and to Hide Divi from the source code. By the way, Divi Ghoster is referred to on its product page now as “THE ORIGINAL WHITE LABEL PLUGIN FOR DIVI” (yes, with “the original” underlined). Why? Keep on reading.

Later on I was surprised when, on the very same day (yesterday, August 10th 2016), somebody published on the blog of some marketplace an article titled “Why would anyone want to white label Divi (or Extra)?” (please excuse me for avoiding names and for not including links, anyone who has followed me or this blog should know why by now). It is not an article intended to discuss what its title says, it is actually a sales page for a plugin named Rebrand DE which does… guess what? Yes! white label Divi!

On that article, its autor claims that when you white Label Divi with Rebrand DE “you are not going to be asked that question or have to face similar questions from potential or incumbent clients”. That question, allegedly asked “often” to web developers and designers “after the sites we build are launched and sometimes just before our proposal is accepted”, is this: “Oh, you are using/have used Divi, isn’t that cheating as it doesn’t really need coding”.

Timely enough, SJ James published just a few hours ago an interesting post on the difference between forking and copying: Copying Niche Plugins And Child Themes? Are You Forking Kidding Me? and, guess what? One of the duality examples he uses for his post is none other than: Divi Ghoster by Aspen Grove VS Rebrand DE By Atlantic Wave! (Incidentally, the company behind Divi Ghoster is co-owned by a former partner of the marketplace where Rebrand DE is exclusively sold. It could be a coincidence, but it sure adds some spice to the reasonings behind Stephen´s post).

You don´t need to hide Divi

Anyway, the question I´m introducing here for discussion is: Why should you want to hide the fact that you´re using Divi in the first place?

That question could also be asked in a number of different ways, such as:

Divi has become a very valuable tool to build websites, a more and more powerful tool with each update. But that´s not enough to have a website ready in just a few minutes, unless you really are a very active and experienced Divi professional (in which case you would deserve to get well paid for that, wouldn´t you, even if your client knew you´re using Divi?).

Imagine someone trying to hide the use of Photoshop so the final design work looks like more manual and more time consuming and therefore it seems to deserve a higher price?

Personally, I never try to hide the fact I´m using Divi for a client site. Quite on the contrary, on some occasions when I´m asked to do a very customized job, I would tell my client something like “I´m planning to use the Divi theme because it´s flexible and powerful enough for your requirements, and I can effectively add to it all the custom code you need for your site“. Then, once I get the contract, I will start adding value to that Divi site. And that´s one of the reasons why I get paid: because I add value. What should I be ashamed of?

But don´t take my word for it. Look at what other people you might trust do about it. Just to name a few: Do you think Geno Quiroz tries to hide the fact that Divi is being used for Monterrey Premier client sites? Does Melissa Love try to hide Divi at The Design Space Co? Just think about any other professionals you know in the Divi community, and check how they handle the fact they´re using Divi (by the way, I´d just named a couple of them as quick examples, I couldn´t talk here about all the great professionals in the Divi world).

Why would you want to belong to the kind of web developer/designer that needs to hide Divi? Value your work and become a proud Divi professional, lose your fears and you will not experience the need to hide any tool you´re using to do your job.

Anyway, if you think you´re doing a lousy job on a client site, if you know you´re not adding enough value to it, go ahead and hide Divi. Elegant Themes (and the rest of the Divi community, for that matter) will be happy to know that a lousy site doesn´t appear as made with Divi.

But, wait a moment…

If all the previous reasonings won´t convince you, there´s still one more reason why I think you shouldn´t try to hide Divi on your client sites: It just won´t work in the end.

I don´t know about other online tools, but WPThemeDetector is already able to detect Divi in the demo sites of both Divi white label plugins.

Both Divi Ghoster and Rebrand DE claim on their videos they´re able to fool WPTD, but they´re not.

Here is what you get when you check the Divi Ghoster demo site on WPTD (you may also want to try with any other site using Divi Ghoster): As for the other plugin, Rebrand DE, here is what WPTD tells us about its demo site: So, as you can see here and as you can test by yourself at WPThemeDetector, none of these plugins serve to hide Divi as promised.

Don´t make a fool of yourself

Now, let´s imagine the following scenario: You develop a client site with Divi but hide it by means of a plugin. You even check it against online theme detectors today and they don´t seem to notice Divi, so you finally deliver the site to your client with a theme you named after your agency, for example, and with you as the theme developer. But your client happens to check the site on a theme detector tomorrow. And it so happens that that particular theme detector is more efficient tomorrow than it was today, so it tells your client that you´ve used Divi, and therefore that you´ve cheated and that you´ve concealed Divi behind a name you´ve invented, trying to make it look like a theme developed by you when that´s not true at all.

Is that what you want?

Wouldn´t it be better to stop worrying about concealing Divi and start focussing on the value of your work instead, no matter what tools you might be using to develop it?

I´d love to hear your opinions through the comments.