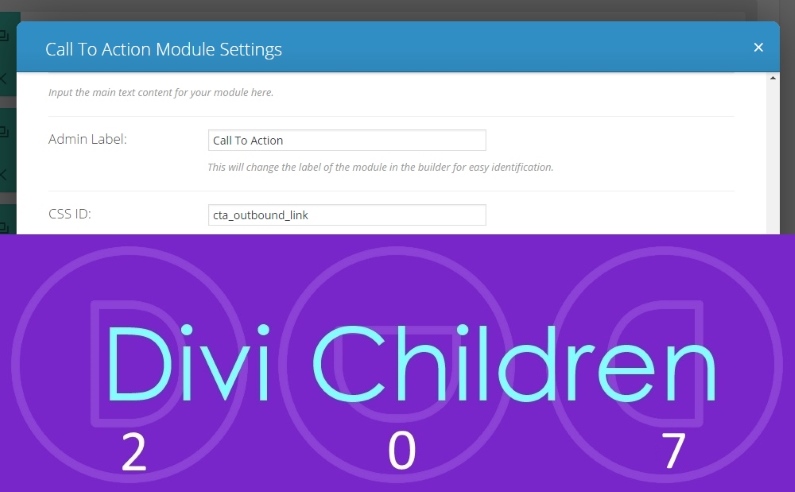 Ian is a photographer who has not only his photographer website but also a Photography Training Website both built on Divi. Months ago Ian commented on the Divi Children 2.0.0 release post:

There is one option I am hoping to see in the future and that is when using the CTA, have an option to open the URL in a new window.

I answered Ian that the next plugin update would include a new Magic Code to take care of that option; I´d already tested it and it worked alright. Ian then replied:

That is excellent news Luis. I have 2 websites which are seriously in need of that option so I am looking forward to the update. Keep up your excellent work.

And this was my new reply:

Well if you are in such a hurry, Ian, you better look in your email inbox. You´ve got a nice surprise in exchange for your great suggestion!

What I did was to send Ian a couple of files to be changed in Divi Children in order to have that unreleased feature working for him.

Of course, I also included the new Magic Code and the function to make it work in my Divi Children development files for new releases.

But, as many of you already know, the Divi Children plugin is being completely renewed and I actually didn´t plan to release new intermediate updates until version 3.0.0 was ready. The new Magic Code for the Divi Call To Action module has been part of the next generation of Divi Children code for months now, and I even forgot I had sent it to Ian.

Even though they have been developed and tested, I´m not including new Divi customizing features in the last Divi Children 2.0.X updates because the whole Divi Children Engine that powers the child themes is built over a completely different approach, and therefore it doesn´t make too much sense having to develop new code to allow the updating of pre-existing child themes based on the old code.

But the “open in a new browser tab” Magic Code I´m talking about here is not that difficult to add to the current Divi Children versions, and also the code for updating existing child themes was possible without much hassle. So, even if I have just released version 2.0.6, I´ve finally decided to release yet one more intermediate update to make that feature available not only to Ian but to all of you. And that´s why Divi Children 2.0.7 is here today.

Opening Divi Call To Action links in a new browser tab is something I´m surprised hasn´t been included in Divi yet, because I´m sure many users are demanding it.

Just copy that Magic Code and paste it on the CSS ID field of the Divi Call To Action modules for which you want the URLs to open in a new browser tab.

Save your Divi module settings, update your page and you´re all set.

I hope you all enjoy this new feature!

The new 2.0.7 version is already available for download. Just follow the instructions for updating it if you have a previous version of the plugin installed in your site.

I´ve also updated the plugin admin files to make sure that existing child themes created by previous versions of Divi Children can be easily updated to include the new feature.

If you want to update your child theme, just follow this steps: