I´m very happy to announce the release of the 3.0 version of Divi Children, the free plugin that automatically creates highly customizable Divi child themes for you. Divi Children 3.0 represents a major breakthrough, and that is the reason why the version number has been bumped from 2.0.9 directly to 3.0.

The plugin has been completely refactored, even some things that might still remain looking more or less the same to regular Divi Children users. Divi Children 3.0 does not only include cool, eye-catching, easily identifiable new features, but a lot of work and time has also been invested under the hood in such matters as security or plugin compatibility.

With more than 250 new Customizer settings or controls, Divi child themes created by Divi Children will be more customizable than ever. And some of them are not just simple Customizer controls but powerful new customizing tools, thanks for instance to the new EZ-Builders.

As I revealed in my previous sneak peek post, the main innovation of the 3.0 release is the introduction of the EZ-Builder, a new kind of compact, easy to use, drag and drop sortable builder to be used directly in the WordPress Customizer.

EZ-Builders are used to add, delete, sort or individually customize building elements. They will be found in the Customizer for every child theme created by Divi Children 3.0, for the following applications:

The new Post Layout Builder is probably the most interesting feature of Divi Children 3.0. Combined with the settings available in the Custom Post Styles section (depending on the elements you have used for your post layout), as well as all the new customizing options brought by the Meta Elements and Meta Styles sections and by other new general customizing settings, you´ll be free to easily customize your single posts with a flexibility never available before in Divi.

If you read my pre-release Divi Children 3.0 sneak peek post Divi Children 3 is almost here… and you are going to love it! and you saw the video I included over there about the new Post Layout Builder, you now what I´m talking about.

The Customizer panel titles show the name of the child theme (unless it is too long, in which case Child Theme is displayed instead) plus the name of the panel generated by Divi Children.

For example, for a child theme named “Divi Tests Child”, the new settings available for customizing UL and OL lists would be located inside the “Lists” section within the “Divi Tests Child – General Settings” panel, and so on:

Having so many options and settings, your child themes could slow down your site. But site speed has also been a concern when developing Divi Children 3.0.

You´ll find that a new Output Mode section has been added to the Customizer as well. Thanks to it, you´ll be able to switch your child theme from Development Mode to Production Mode once you are done customizing your site.

Once you set your child theme to Production Mode, your site will run much faster because your child theme will stop querying the database to retrieve all your settings, and all your customized saved CSS will be sent to output at once instead.

First of all, of course, you´ll need to install and activate the plugin. For those of you who are not familiar with Divi Children yet, it gets installed just like any other plugin, as explained in the Divi Children plugin Installation page.

Once the plugin is active, you´ll find the Divi Children page under Appearance in your WP Admin area, which includes 3 tabs:

We´ll go quickly through each of these options, as well as through how to use a child theme created by Divi Children 3.0:

This is the main Divi Children subpage, and the default tab that will be open when you access Appearance > Divi Children. It includes a form with all the relevant information about the child theme the plugin is going to create for you as soon as you hit the “Create Divi Child Theme” button.

Divi Children grabs from your site all the default information shown on the various form fields, but you can modify whatever you want before creating your child theme. 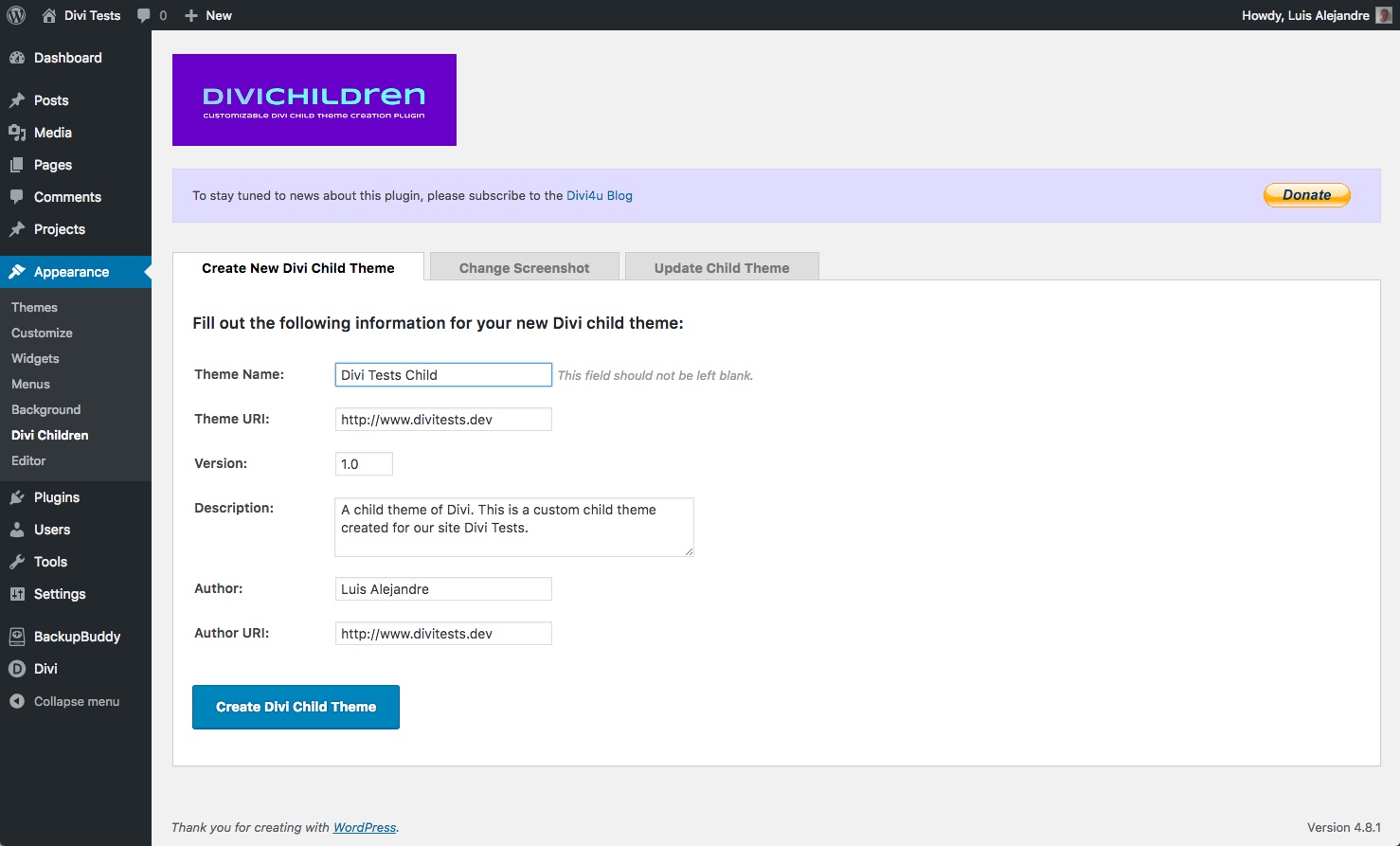 Once you hit the button, Divi Children automatically creates the new child theme, makes sure it is there inside your wp-content/themes folder, checks that everything went alright and then informs you about the success, showing the child theme details: 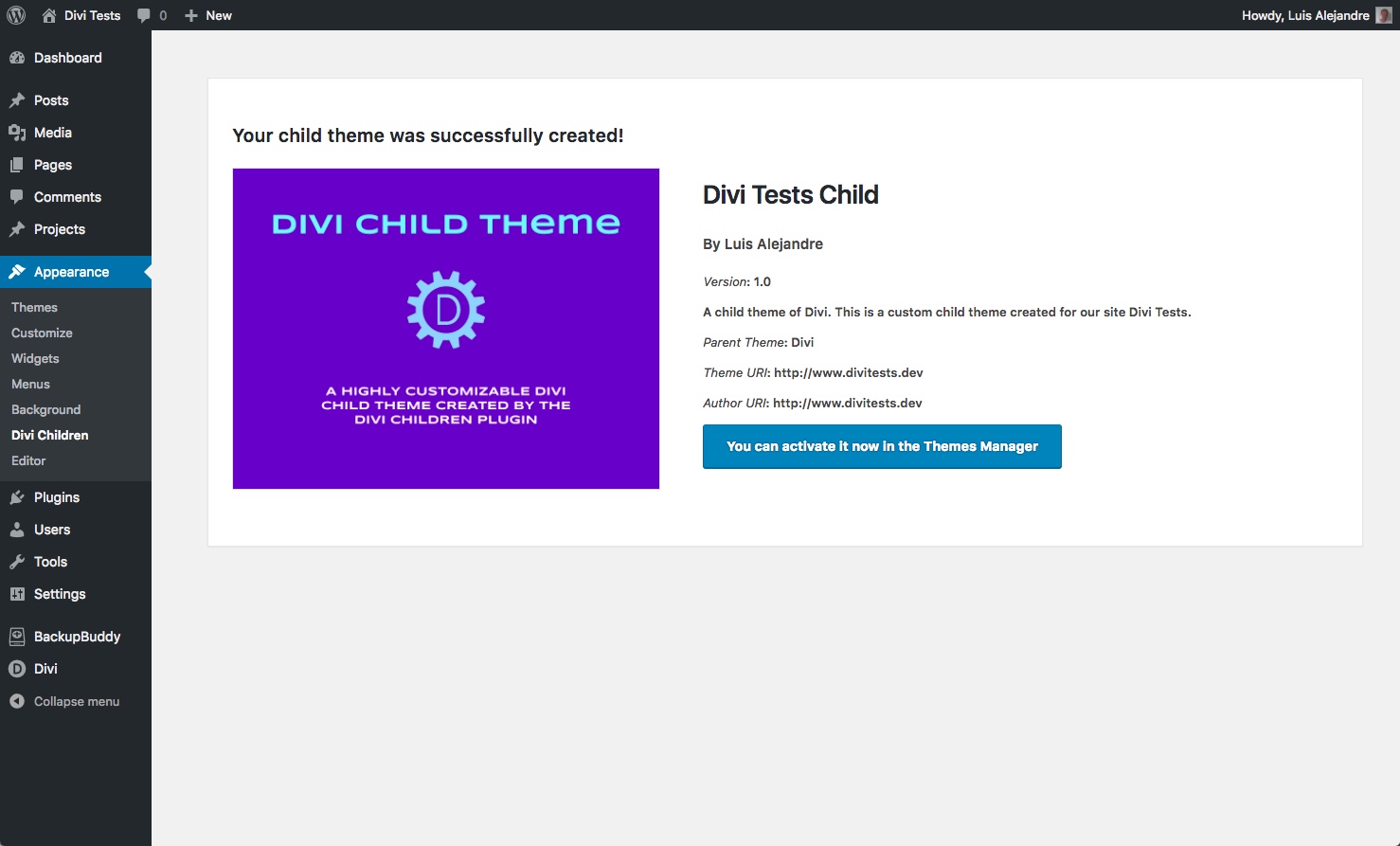 As long as you have the parent Divi theme installed in your site, you´re all set now and you can go ahead and just activate the new Divi child theme that Divi Children 3.0 created for you.

Once you activate your new child theme, you won´t see any child theme settings page in the WP Admin area, everything happens within the WordPress Customizer.

Just open the Customizer and you will notice that new panels and sections specific to your child theme have been added by Divi Children 3.0 to the default Divi Customizer sections.

Most of the options and settings are quite straightforward (or at least they should be, please let me know otherwise), and instructions or hints are provided as needed. So, as soon as you have created and activated your new Divi child theme, you will be ready to start playing with all the new available builders, options and settings, and to start customizing your Divi site in many ways you simply were not able to achieve before Divi Children 3.0 came around.

I keep repeating this every time the subject arises, but even so many users don´t seem to remember it. So, just to make sure, and also for all the new (welcome) Divi Children 3.0 users, I´ll write it down once again: Once you have created your child theme, the Divi Children plugin does not need to remain active.

That´s right, you can deactivate or even delete the plugin, and all the customizing features created by Divi Children will still be there working alright for you.

Changing the screenshot of your Divi child themes

If you don´t want to use the default screenshot installed by Divi Children 3.0 for your child theme and would rather have your own image for it, you can use the Change Screenshot feature provided in the second tab of the Divi Children page: 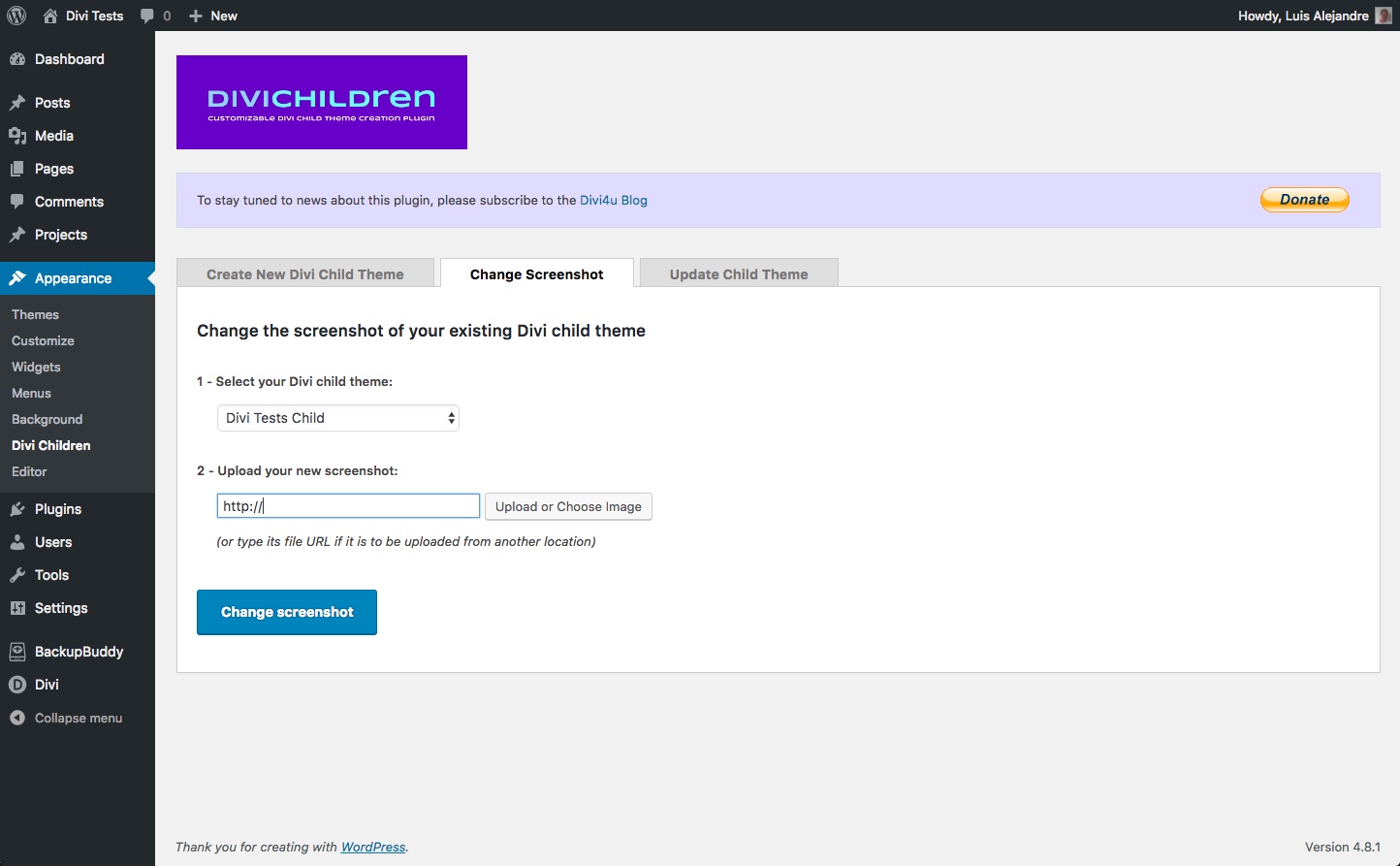 As I informed at the moment of releasing Divi Children 2.0.9 a year ago now, the code for updating old child themes was removed because the process of checking and updating existing child themes was becoming too complicated at that moment, and I also said that it would completely change and get far simpler for future versions of Divi Children.

Now that everything has been redeveloped I´ve also made some arrangements to simplify that process. All the child theme code files that may need future updating (including the new custom single template and some other child theme php files) have been moved to the Divi Children Engine for easy future updating of child themes previously created by earlier versions of the plugin. 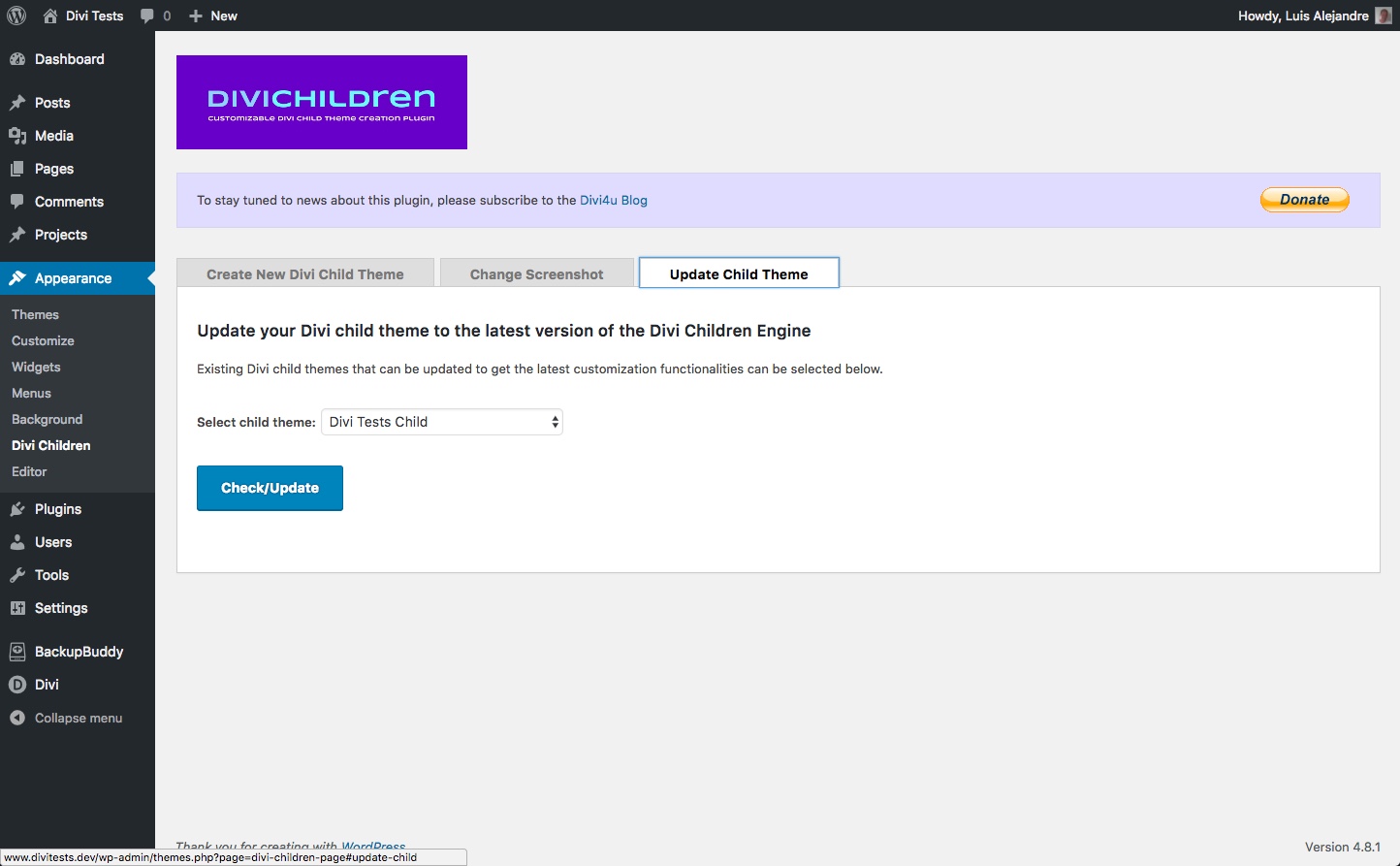 But remember that the old child theme updating feature was interrupted in Divi Children 2.0.9, so the new Update Child Theme functionality will only work from now on, for future updates to the child themes you´ll begin creating with Divi Children 3.0 now (or with future releases of the plugin). Actually, only Divi child themes that are eligible for update (those created by version 3.0 or by a newer one) will be ready to be chosen under Select child theme.

On the other hand, if you try to update any of the child themes you´ll be creating with Divi Children 3.0, the plugin will let you know that no updating is required:

Logically enough, you´ll have to wait for future child themes features to be able to get them by updating your child theme! But when the time comes, when newer versions of Divi Children are released, you´ll see it was worth it to have the updating system so deeply modified. Everything will be much easier then.

Time to give it a try

I won´t be explaining here the whole lot of new cool features now available in Divi Children 3.0. During the next days, though, I will be publishing some new posts where I´ll get into more details about them, and I´ll show you some useful examples on using the new features.

So it is time to give it a try now. Go ahead and download the new Divi Children 3.0, use it to create a wonderful child theme for your Divi site and enjoy playing with it!

Please let me know what you think about the new Divi Children 3.0 in the comments.