Updating my site to Divi 2.0 – My own experience 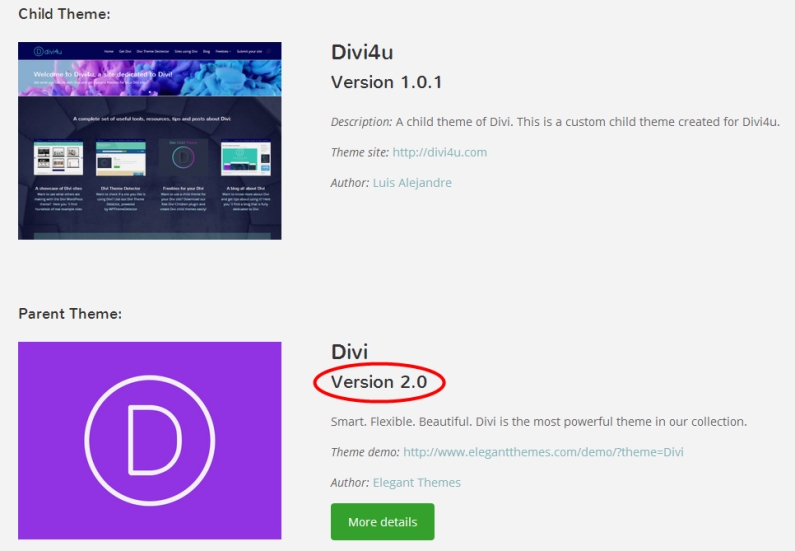 On the Divi 2.0 release post Divi 2.0 Has Arrived, Giving “Countless Possibilities” A Whole New Meaning, as well as on the comments to that post, Nick Roach promised that the update to Divi 2.0 from the previous versions would be seamless.

I had just launched this website based on a Divi child theme with a lot of customization built on it when Divi 2.0 was released, so I wanted to wait a little bit and make sure everything would work just fine when I upgraded to Divi 2.0.

But I finally did update my parent theme. Divi4u is running now on Divi 2.0 and, as you can see, it looks and works alright.

The main issue I encountered was that, for some reason, my social icons where missing in my footer. They were not visible plus they where arranged vertically instead of horizontally, so the footer had a larger height and was like a empty dark band except for the credits line.

This is not a problem that will appear in fresh Divi 2.0 installations (I checked that out in one of my dev sites), and I don´t know whether it might happen to you when upgrading your site to Divi 2.0. Anyway, I quickly found the solution at ET support.

Just in case you need it too, these are the lines I had to add to my style.css file in order to solve this issue:

There were some other minor problems, but they were related to the renaming of classes because of the the addition of new Divi 2.0 features, and those minor problems only appeared because I´d tweaked some classes in my child theme.

In fact, one of the problems I found when putting this site together with the previous versions of Divi has already been solved in Divi 2.0:

As you can imagine, some pages in this website are built on custom templates (for instance, the Divi Theme Detector tool and the Examples of sites using Divi showcase page are both based on custom page templates specifically developed for their respective functionalities). I was surprised when I first found that with Divi 1 it looked like it was not possible to use your own custom page templates, although as I soon learned through ET support I was able to solve this issue by modifying some code .

But when I now updated to Divi 2.0, my custom pages worked right away without the need for any tweaking of the parent theme files.

All I have to do now is to think about the right ways to take full advantage of the new features brought by Divi 2.0!